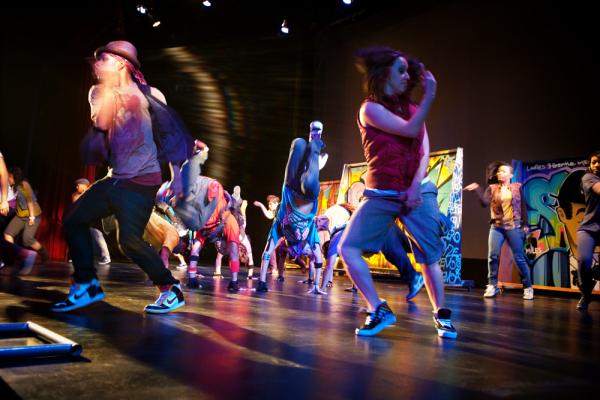 
Vimbly assigned me, their hippest worker (or at least thatâ€™s the title Iâ€™m giving myself), to find the absolute best hip hop class in NYC. To preface, Iâ€™ve never considered myself a good dancer. Generally, my dance moves consist of leaning against a wall, nibbling on a pretzel, and scurrying across the dance floor trying not to make physical, or eye, contact with anybody. When I do dance, a rare sight, I generally bust out a flurry of movements, combining the finger-snapping prowess of George Michael and the subtle kicks of Elaine from Seinfeld. You see where Iâ€™m coming from?


Upon entering PMT Dance Studio, I instantly embraced the bare-bones atmosphere. This is a dance studio, no frills. No need to impress amateurs with Broadway lights and glimmer. I felt like Rocky in the Italian Market, except there were no carcasses or mustached men to bemoan my presence. In all, PMT breathes dance in an underground sort of way.


I shuffled into the room nervously, seeing as this would be my first ever dance class. I expected the worst. I was expecting Levi, our instructor, to me an intimidating, Apollo Creed character, shouting instructions like a drill sergeant and inevitable showering us with his spittle. And I expected to be like Chunk from The Goonies, filled with fear and kind of hungry.


Once everyone entered the classroom, our class was small. There couldnâ€™t have been more than ten people. I later realized the value of this class size because it meant more individualized instruction, which I needed. A lot.


*As an aside: Contrary to the film Step Up, skinny jeans and a cardigan arenâ€™t proper hip hop attire. Wear some shorts and a t-shirt.


Levi was nothing like the Apollo Creed Iâ€™d conjured moments earlier. He was a genuine instructor who cared about my ability to master these moves. He made sure instruction never went beyond anyoneâ€™s grasps, and, when one faltered, he didnâ€™t hesitate to help. Beyond that, the room was fun and lively, and the music made it so much better--even if my nagging requests for some George Michael or Totoâ€™s â€œAfricaâ€ were denied.


The class itself was separated into two parts. The first part was spent deconstructing each move in the routine. For me, this meant learning cool hip hop moves and terminology like â€œpopâ€ and â€œrock,â€ and â€œwhy are you still snapping your fingers.â€ I felt a part of the team. This deconstruction built a necessary foundation, and, honestly, I found it more valuable in my learning than the choreography portion. This brings me to the second half of class: Choreography. So those moves we deconstructed in the first half of class return to practical use--kind of like learning the words of a language but never using them in conversation, like â€œwhom,â€ for example. Now, I know this sounds intimidating, and it was, but you find yourself so invested in the dance and learning it that you donâ€™t focus on the missteps, but you realize, â€œhey, Iâ€™m smiling. Wow! This is more fun than I thought. And wow, Iâ€™m sweating as much as Macho Man Randy Savage.â€


Levi maintained a high energy level throughout the class, but it never became overbearing. Iâ€™d fall behind, or someone else would, and heâ€™d pause and make sure we caught up. It was one of the few beginner hip hop classes I took where the class was designed for the beginner and not merely as a â€œdrop-inâ€ for any level.


By classes end, sore (I somehow managed a bruised knee. I never fellâ€¦) and drenched in sweat, I left feeling a bit more confident embracing the rhythm of music and dance. Something Iâ€™d never experience previously. Of course, this doesnâ€™t mean Iâ€™m going to pop, lock, and drop, under the name â€œUh-Oh Oreo,â€ the next time I hit the club, but it means that I wonâ€™t, or hope not, be struck and paralyzed with the same fear I usually am.


Levi and PMT Dance Studio. Iâ€™d like to say thank you!