Skip the Movie: 12 Amazing Shows to Check Out in NYC 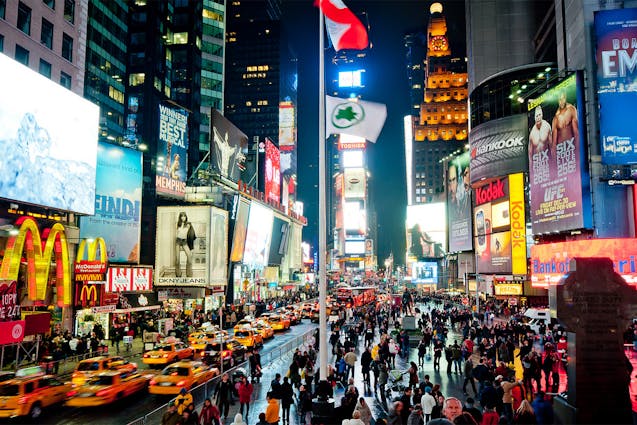 New York, New York! The theater, comedy and art capital of the U S of A is worldÂ­famous for endless entertainment at all hours of the night. Itâ€™s the city that never sleeps, after all. Skip the usual dinner and a movie combo to experience some of NYCâ€™s best live shows. From Japanese game shows and room escapes to comedy clubs and live music venues, youâ€™ll never run out of new and exciting activities with which to fill your evenings in this world class city.

Taking pleasure in other peopleâ€™s pain or misfortune is a national pastime in Japanese culture and that spirit lives on in NYC life. For those who love a little bit of schadenfreude, this live and comically charged Japanese game show BATSU! will have you howling at the antics of four warriors battling it out to avoid embarrassing and hilarious punishments. From electric shocks, to paintball guns, to giant egg-smashing chickens, you never know what awaits you at this eccentric and curious cultural competition!

Complimentary artichoke pizza and free comedy sets from the countryâ€™s next big talents presented in the comforts of a repurposed old-school beauty salon? It may sound like a random assortment of features, but this uproarious evening will have couples clamouring for more. With comedians featured on networks like Comedy Central and MTV, this evening promises a witty array of new material from your favorite â€œdropouts.â€

Murdered By the Mob.

Toss out the usual routine of dinner then a showâ€”at NYMS Productions Inc., they can happen at the same time! This live dinner theater and murder mystery experience will have you and your significant other howling with laughter at one moment and caught in suspense in the next. Watch as the cityâ€™s favorite mobsters search for clues over who murdered who and be sure to toast to the Don while you win prizes and devour a delicious three course meal. It all comes together to make for a killer time.

Are you looking for a little more PG-13 and up entertainment? Look no further than the infamous Slipper Room, where every Thursday you can catch the best burlesque show in NYC. Combining Vaudeville comedy, choreographed dancing and amazing costume design, the cityâ€™s favorite burlesque club features a rotating cast of top talent who are willing to bare nearly-all for a good laugh.

Trapped in a room with a Zombie.

Note: no real zombies are harmed in this awesome, room escape adventure thatâ€™s been known to work up quite the appetiteâ€”for some. Practice your zombie apocalypse survival skills with a team of up to 12 to unlock the door in under an hour. Otherwise, you become zombie chow. And who knows? Maybe you and your date will find you really are a til-death-do-you-part kind of duo.

Donâ€™t worry about getting stage fright just yet because this isnâ€™t a karaoke bar. Instead, itâ€™s the longest and most prestigious open-mic night for emerging artists in...the...world. Several artists you may recognize, including Prince, Jamie Foxx and Mariah Carey, got their start on this stage. Take your date to some great live music, and who knows? Maybe youâ€™ll spend a future anniversary watching one of these artists on a world tour in years to come.

What do you get when you mix alcohol with Shakespeareâ€™s famous plays? A roaring good time. Trained thespians down at least 5 shots of their favorite drink (usually whiskey) before putting on an unpredictable production of a Shakespeare play. From Hamlet delivering soliloquies Ã  la Christopher Walken to actors pulling up audiences members to play The Tamed Shrew, expect an intimate show tailored to audience hecklers and improv enthusiasts that will have you leaving in tearsâ€”from laughing so hard, that is.

Wednesdays mark the middle of the work week, and for some of us it can be the day when we need a pick-me-up the most. To hold you over until the weekend, head over to this venue where you can enjoy sets from some local up-and-coming musicians. From folky singer-songwriters to funky, soul brother music, the beats and line-up change every week, which means you can make this musical outing a staple in your weekly routine.

This Ainâ€™t a Drag.

Coming to this show isnâ€™t a drag by any means; well, except that it features drag queens. This mini tour invites you to watch NYCâ€™s top talent, including musicians and performers, at a one-of-a-kind venue where the gay rights movement was first born: the Stonewall Inn. If youâ€™re looking for a unique and exciting dinner and a show, youâ€™ll definitely appreciate this night of music and dancing.

Live music from the 60s.

Take your fun-loving date to the world-famous Village Underground in Greenwich Village, where the spirit of the 60s is alive and thriving. Established with the intention of being the best small music venue in the world, this club has seen the likes of Bob Dylan, Carly Simon, Allen Ginsberg and Elvis Costello. Stay for your favorite folksy era hits from a lineup of established musicians, then hop on a bus to grab a late night meal at a nearby retro diner.

Founded by native New Yorkers experienced in the comedy business, youâ€™re guaranteed to bust a gut at this long-standing comedy night at the EastVille Comedy Club. With excellent bar and restaurant service (a rarity at comedy clubs), you can enjoy all-star standups at the top of their game. You may even recognize some of them from shows like 30 Rock and Last Comic Standing.

Give my regards to Broadway.

When itâ€™s all said and done, letâ€™s face it; thereâ€™s nothing like a show on Broadway. From one-woman shows to musicals to serious and innovative theater, you can score great tickets for any play when youâ€™re visiting New York. Itâ€™s probably the only reason anyone shows up in Times Square anyway, right? Whether youâ€™re interested in Kinky Boots or Hedwig and the Angry Inch, youâ€™re sure to find the show for you.