5 Things You Didn't Know About Alcatraz Located on a small island surrounded by choppy waters, just off the coast of San Fran, lies a prison that has held the country’s most dangerous criminals...

Alcatraz -- like something out of a comic book, it’s no wonder it’s the most notorious incarceration facility in the country. Home to likes of Al Capone, George “Machine-Gun” Kelly, and Arthur “Doc” Barker, the high security federal building operated from 1934 to 1963, containing the murderous gangsters of the 1920s and 30s. In its 29 years of operation, the prison managed to rack up quite a colorful -- and sometimes violent -- history.

Here’s a quick look at some intriguing Alcatraz facts you may not know. If you don't get your fix here, read on to check out the activities we offer that will take you there to see it for yourself!

1) There was a Deadly Battle

It was perhaps the most violent event in the history of Alcatraz. What started out as an escape attempt by two prisoners turned into full-on shootout that would last three days, leaving five prisoners and guards dead, as well as numerous others wounded.

Notorious bank robber, Bernard Coy, overpowered a prison guard as the guard was frisking Coy's fellow prisonmate, Marvin Hubbard. The two released several other prisoners and made their way to the elevated gun gallery. After starving himself for months, Coy was able to squeeze through the bars and get his hands on the numerous guns kept in the gallery.

The final step to escaping would be getting through the prison yard door. However, after trying too many of the wrong keys, the lock jammed, and the prisoners were trapped. Hoping to use the captive guards as hostages, the prisoners refused to surrender, and demanded safe passage from the island. But the US government wasn't going to let that happen.

For three days, guards and Marines fired barrage after barrage of bullets into the cell block where the prisoners were holed up. After a particularly long exchange of gunfire, the Marines stormed the narrow utility hall in which the rebellious prisoners were trapped, finding the bodies of Coy, Hubbard, and another collaborator. The two surviving prisoners were subdued and executed, putting a bloody end to Alcatraz’s most violent chapter.

Violent criminals weren’t the only occupants of Alcatraz Island. The guards and workers of the prison were housed, along with their families, in residential apartments set up on the island. This meant that many children grew up calling Alcatraz their home. It may seem like a tough deal, having to grow up only a two minute walk from hundreds of murderous criminals, but residential life on the island for the children was actually quite pleasant.

The Officer’s Club was the center of social life on the island for its unincarcerated inhabitants. The building housed a bar, bowling lanes, billiards tables, and it even showed movies every Sunday. The residents also had access to the ferry that would make frequent trips between the island and San Francisco. Every day the kids of the island would board the ferry to be taken to and from school. It beats the hell out of a subway commute.

Another added bonus to growing up on the island -- all laundry was done by the inmates of the prison. How many people can claim they made Al Capone wash their dirty underwear?

3) There was an Occupation of Native Americans

Long before the prison was constructed, or any Europeans even made it to the West Coast, Native Americans settled on Alcatraz island to collect the many eggs laid by Pelicans that lived there, as well as for other uses. Hundreds of years later, after the prison was closed and abandoned, Native Americans, calling themselves the Indians of All Tribes, returned to the island once again to reclaim it as their own.

They had a very good claim to it. Due to the Treaty of Fort Laramie, any government land that was no longer in use was to be given back to the Native Americans.

When Indians of All Tribes reached the island, they found the prison abandoned due to years of erosion from the harsh sea water. For two years, activists stayed on the island, demanding that a cultural center celebrating Native American heritage be built there. The occupation received widespread media attention leading to many celebrities supporting and even visiting the occupation itself, including Jane Fonda and Marlon Brando. 4) There is a Historic Lighthouse

How much history can fit in a tiny 22-acre island? Apparently a lot. Alcatraz Island is the location of the first lighthouse on the West Coast. Originally erected in 1854, the structure had to be replaced by an even taller lighthouse after an earthquake all but destroyed the original in 1903.

While boats now have plenty of navigation equipment to get through dangerous waters unscathed, the lighthouse was invaluable before the invention of such instruments. San Francisco Bay is known to have extremely choppy waters, with strong currents, and of course the thick fog that the Bay is famous for. Without this powerful beacon, the conditions in San Francisco Bay could’ve caused a lot more shipwrecks. Speaking of ghosts...

What would an historic prison be without a few ghostly legends? The haunted past of Alcatraz Island goes back long before the prison was even built. Native Americans believed the island to have evil spirits and mainly used it as place to send exiled members of the tribe. The ominous feeling the island gives off has often been reported often since.

Once the prison opened, many prisoners and even guards claimed to have experienced unusual occurrences. One of the most terrifying legends is of a prisoner who claimed to see red eyes in the darkness of the prison one night. For hours the prisoner screamed. In the morning, the guards found the prisoner dead on his bed, his eyes bulging, and unidentifiable strangle marks on his neck.

After the prison closed, even more stories appeared, claiming the ghosts of former inmates still roam the halls today. There are reports of the sound of a banjo being played from the laundry room where Al Capone would practice, and sounds of sewing machines being used in the industry building where a violent murder took place. There’s no end to the reports of locked cell doors swinging open and shut, or of shadowy figures looming in the dark shadows. While the veracity of these claims have yet to be proven, one thing is certain -- one best not spend a night alone on the island. 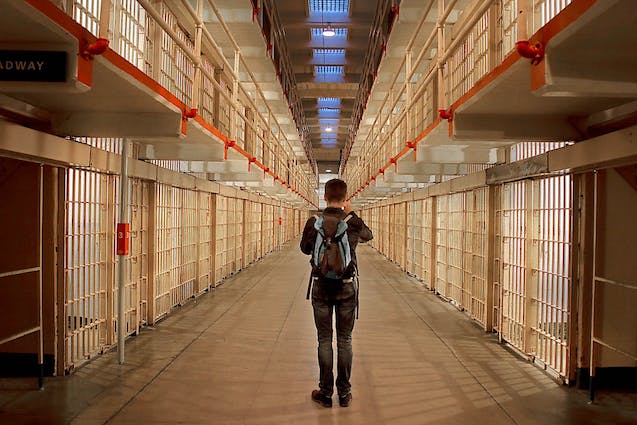 Can’t get enough Alcatraz Island facts like these? Vimbly offers numerous Alcatraz tours that are catered to many different interests.

From tours for history buffs, to tours filled with ghost stories and legends, there’s something to suit anyone’s taste. You never know what you might learn, so click through to find the one that’s perfect for you!

5 San Fran Dates You Knew Were Cool Before Anyone Else

If You're Going to San Francisco... Check This Flower-Themed List of Fun Spring Classes!