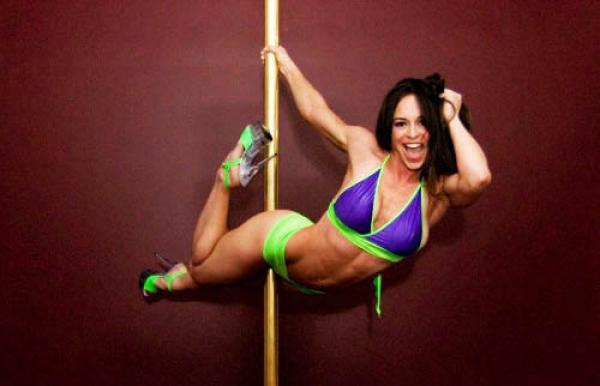 As the token female at Vimbly, I was not-so-surprisingly given the task of researching the best pole dance classes in NYC. Having already taken some dance fitness classes in the city, I felt like this wouldnâ€™t be too different. Well, I was wrong. It was infinitely better. Dance fitness classes are great because you come out of them totally pumped and feeling like you could go to a club and dance the night away. Pole fitness classes are amazing because you come out of them feeling as sexy, strong and confidence as Gisele Bundchen (minus the $40 million paycheck though, shucks!).

After trying a couple other studiosâ€™ beginner and intro pole dancing classes, I ended up enjoying New York Pole Dancingâ€™s (NYPD) intro class the most. The class focused on building a pole and floor routine that integrated the fundamental moves of this sexy sport. And it is a sport. On top of turning up the heat and heart rate with expressive, sensual movements, the class works on strengthening the body and teaching proper pole technique so that you can climb, spin and descend with ease.

Letâ€™s just set things straight now, my dance moves were limited to the electric slide and feeble attempts at following my dance instructorâ€™s hips. Dance and smooth, fluid movements are not my specialty and I accepted that taking a pole dancing class would mean embarrassing myself more than once or twice.

There were not enough poles in the class to accommodate every student, so we all ended up rotating, which was good for me because I realized while waiting for my turn that a lot of the people were just as much beginners as I was. It also helped me realize just how encouraging our teacher was, working with the other students as they fumbled with some of the moves.

And when I felt like I had nothing to fear and everything to gain, the real fun began. The feel and the mental image of my moves began to shift from awkward preteen seventh grade moves to sexy dancers commanding everyoneâ€™s attention moves. By the end of the class, we were all high with boosted self-confidence from being able to pull off some of the climbs, spins, and sultry floor moves as well as from getting through NYPDâ€™s crazy workout of a beginnerâ€™s class. Thatâ€™s right, I did say I was looking for the best pole fitness class in NYC.

The instructors, as far as Iâ€™m concerned, make NYPDâ€™s classes truly exceptional. Our instructor, Bonnie, confirmed those rumors in her wonderful teaching â€¦ and body. Iâ€™m not kidding, nothing motivates you more in a fitness class than seeing the results on the instructors and she is in great shape.

Bonnieâ€™s intro class was hard and physically taxing, but for a fitness-oriented gal like me, that was perfect. The dance moves were seamlessly laced into the routines, adding to the level of difficulty, fluidity, and heat to the class. Even though this was mostly for field research, I am definitely thinking of taking a look at their monthly packages to try some of their other classes like sexy seats or climbs and spins. For all the ladies out there, this is one sexy workout that you really want a part of.